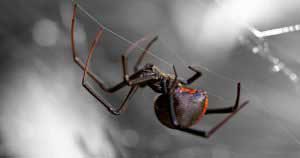 The Black Widow spider derives its name from the belief that the female eats the male after mating, though this rarely happens in nature. These spiders have a mostly spherical, black abdomen, marked with a reddish hourglass shape. Younger spiders are primarily orange and white, but become darker as they age. Black Widow spiders live in sheltered areas such as underneath stones, woodpiles, decks, rodent holes, and sometimes shrubbery. Be cautious around dry, man-made structures including barns, sheds, meter boxes, barrels and brick veneer. When found indoors, they are usually dwelling among cluttered garages and basements.

The Brown Recluse spider is named for its coloration and habits. They are found particularly in the south central Midwest and in the southern states from Texas to Georgia. They are relatively small, with an average body length of 1/4-1/2″ which is tan to dark brown, with a darker fiddle-shaped mark on its neck. They prefer to feed on small, live insects. Outside, these spiders can be found under rocks, utility boxes, woodpiles and the like. Inside, they dwell in undisturbed areas among boxes, papers, clothing and crevices. Hence, be careful when putting on seldom-used clothing and cleaning storage areas. Fortunately, people are rarely bitten, as the Brown Recluse tends to scurry when disturbed.

The House Spider is most often found indoors. While they are not dangerous, they are a nuisance because of their webs. Their coloring varies from yellowish brown to dirty white to almost black, each with dark stripes. House Spiders tend to build their webs in humid, undisturbed areas such as garages, barns and warehouses, usually in upper corners or under furniture. The spider and their web are easily removed by using a vacuum.

While the Wolf Spider is big, hairy and looks rather scary, they are mainly just a nuisance to humans. Wolf Spiders are dark brown with gray markings. Unlike most spiders, they hunt and chase their prey, mostly during the night. They live in sheltered areas including burrows, firewood, decks, leaf piles, etc. Wolf Spiders may enter your home or property while chasing prey, and will likely stay once they have entered the building. Placing glue boards along walls, furniture and doorways is an effective way to get rid of them.