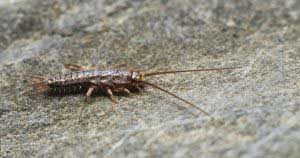 Earwigs are typically nocturnal and hide in small, dark, moist areas during the daytime. During the summer, they can be found around damp areas such as near sinks and bathrooms. They tend to gather in shady cracks, openings or anywhere they can remain concealed during the daylight. Good places for them to hide include compost, mulch, pine straw, waste bins, picnic tables, patios, lawn furniture, window frames or anywhere they have access to small cracks that can potentially provide a hiding place. For protection from their predators, some species squirt foul smelling liquid from scent glands located on their abdomen and it simultaneously uses its pincer in defense.

Scorpions are a nuisance pest that requires medical attention if stung. They are two to four inches long, with a stinger at the end of their tail-like structure. Scorpions are found primarily in the Southwest and Southern regions of the United States. They hunt their prey at night (other insects such as crickets or cockroaches), and during the day hide under rocks, logs and debris, or inside burrows and sandboxes. Indoors, scorpions may be lurking in attics, in bathrooms to find water, or even in folded up clothes and blankets. A scorpion infestation is controlled by removing materials where they could hide, damp environments, their food source and may require pesticide application.

Silverfish are fish-shaped insects with silvery scales covering their bodies. They are ½ to ¾ of an inch in size. Signs of infestation include feeding marks, yellow stains and black, pepper-looking feces on food sources such as wallpaper, labels and envelops. They can be found almost anywhere inside residential and commercial structures. They prefer room temperature areas with high humidity. If you identify silverfish at your property, a professional inspection followed by the necessary treatment should be done to eliminate the infestation.

Springtails derive their name from the spring-like structure that allows them to jump. They are nuisance pests that prefer high moisture areas where they can feed on decaying vegetation, bacteria, pollen, algae and the like. Since they are in search for moisture, Springtails often make their way into bathrooms, kitchens and crawl spaces as well as potted plants. Outdoors, they may be found in damp areas such as mulch, leaf piles and logs. If Springtails are found, the best way to remove them is to dry out the area of infestation, after which they will leave or die. If the area cannot be dried, then the appropriate pesticide should be applied.

Stinkbugs are named for the strong, cilantro-like odor emitted when they feel threatened. They are a little over ½ of an inch long with a shield-shaped body. Stinkbugs are various shades of brown with lighter markings. They are agricultural pests that can cause substantial damage to fruit and vegetable crops. Stinkbugs typically invade homes in the fall. You can prevent stinkbugs from invading your house with the appropriate treatment. If you suspect there is an infestation, a thorough inspection followed by proper sanitation and pesticide application should follow.

Yellow jacket or yellow-jacket is the common name in North America for predatory wasps of the genera Vespula and Dolichovespula. Members of these genera are known simply as “wasps” in other English-speaking countries. Most of these are black-and-yellow; some are black-and-white (such as the bald-faced hornet, Dolichovespula maculata), while others may have the abdomen background color red instead of black. They can be identified by their distinctive markings, small size (similar to a honey bee), their occurrence only in colonies, and a characteristic, rapid, side to side flight pattern prior to landing. All females are capable of stinging which can cause pain to the person that has been stung. Yellowjackets are important predators of pest insects.

Wasps have narrow waist with slender bodies, cylindrical legs, and appear shiny with smooth skin. The most common wasps encountered by people are: Yellowjackets, baldfaced hornets, and paper wasps. Wasps only sting to defend their colony &/ themselves. This involves an injection of protein venom causing pain and sometimes other reactions. Wasps have the ability to sting multiple times because they are able to pull out their stinger with out injury to them self. If stung by a wasp the stinger will not be left behind. Wasp venom differs from bee venom so having a severe reaction to one species does not mean you’ll have a severe reaction to the other. Most individuals will have a mild reaction to wasp stings. Mild reactions symptoms include: itching, burning, redness that may last up to a week. Local mild reactions can be treated with ice or commercial ointments that help relive itching & pain. Allergic reactions include: swelling away from initial site, hives, rash, head-aches, and stomach upset.