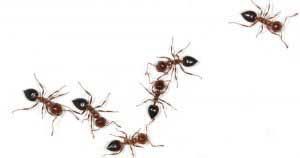 The Little Black Ant (Monomorium minimum) is a species of ant. Members of the species are tiny and shiny black in color. These ants are pests that are usually found outdoors or in wood inside a home that causes it to decay. Workers are 1/16th inch in length and the queens are 1/8th inch in length. They use recruitment to deal more effectively with large prey. They form colonies with multiple queens. Ant eggs laid by the queen can take just 10 days to hatch. Winged ants may fly away and start a new colony if the current colony is overpopulated.

Carpenter ants are large (¼–1 in) ants indigenous to many parts of the world. They prefer dead, damp wood in which to build nests. Sometimes carpenter ants will hollow out sections of trees. The most likely species to be infesting a house in the United States is the Black carpenter ant, Camponotus pennsylvanicus. However, there are over a thousand other species in the genus Camponotus.

Carpenter ants can damage wood used in the construction of buildings. They can leave sawdust like material behind that provides clues to nesting location.

In at least nine Southeast Asian species of the Cylindricus complex, such as Camponotus saundersi, workers feature greatly enlarged mandibular glands. They can release their contents suicidally by rupturing the intersegmental membrane of the gaster, resulting in a spray of toxic substance from the head, which gave these species the common name “exploding ants”.

Its defensive behaviors include self-destruction by autothysis. Two over sized, poison-filled mandibular glands run the entire length of the ant’s body. When combat takes a turn for the worse, the ant violently contracts its abdominal muscles to rupture its body and spray poison or glue in all directions. The ant has an enormously enlarged mandibular (abdomen) gland, many times the size of a normal ant, which produces the glue. The glue bursts out and entangles and immobilizes all nearby victims. The termite, Globitermes sulphureus has a similar defensive mechanism.

The pavement ant, Tetramorium caespitum, is a common household pest. Their name comes from the fact that they usually make their homes in pavement. They are distinguished by two spines on the back, two nodes on the petiole, and grooves on the head and thorax.

During early spring, colonies attempt to conquer new areas and often attack nearby enemy colonies. These result in huge sidewalk battles, sometimes leaving thousands of ants dead. Because of their aggressive nature, they often invade and colonize seemingly impenetrable areas. In summer time the ants dig out the sand in between the pavements to vent the nests.

The pavement ant is dark brown to blackish, and one-eighth inch long. It will eat almost anything, including insects, seeds, honeydew, honey, bread, meats, nuts, ice cream and cheese. The species does not pose a public health risk, but can contaminate food and should be avoided.

Fire ants are a variety of stinging ants with over 280 species worldwide. A typical fire ant colony produces large mounds in open areas, and feeds mostly on young plants, seeds, and sometimes crickets. Fire ants often attack small animals and can kill them. Unlike many other ants, which bite and then spray acid on the wound, fire ants only bite to get a grip and then sting (from the abdomen) and inject a toxic alkaloid venom called Solenopsin, a compound from the class of piperidines. For humans, this is a painful sting, it hurts, a sensation similar to what one feels when burned by fire—hence the name fire ant—and the aftereffects of the sting can be deadly to sensitive individuals. The venom is both insecticidal and antibiotic. Researchers have proposed that nurse workers will spray their brood to protect them from microorganisms.

Fire ants nest in the soil, often near moist areas, such as river banks, pond edges, watered lawns and highway edges. Usually the nest will not be visible as it will be built under objects such as timber, logs, rocks, pavers, bricks, etc. If there is no cover for nesting, dome-shaped mounds will be constructed, but this is usually only found in open spaces such as fields, parks and lawns. These mounds can reach heights of 40 cm (15.7 in).

Colonies are founded by small groups of queens or single queens. Even if only one queen survives, within a month or so the colony can expand to thousands of individuals. Some colonies may be polygynous (having multiple queens per nest).

The pharaoh ant (Monomorium pharaonis) is a small (2 mm) yellow or light brown, almost transparent ant notorious for being a major indoor nuisance pest, especially in hospitals. The origin of this “tramp” ant is uncertain, although favored alternatives include West Africa and Indonesia. The Pharaoh ant has been introduced to virtually every area of the world including Europe, the Americas, Australasia and Southeast Asia. Pharaoh ants are a tropical species but they thrive in buildings anywhere, even in temperate regions provided central heating is present.

Unlike most ants the Pharaoh ant is polygynous, meaning its colonies contain many queens (from 2 to over 200). An individual colony normally contains 1000–2500 workers but a high density of nests gives the impression of massive colonies. Colonies also lack nest-mate recognition so there is no hostility between neighboring colonies. Pharaoh ants lack the normal cycle of reproduction observed in most ants; they are able to produce sexual reproductive individuals as required. Laboratory colonies exhibit weak reproductive cycles but this cannot be assumed to be the natural condition. Colonies reproduce by “budding”, where a subset of the colony including queens, workers and brood (eggs, larvae and pupae) leave the main colony for an alternative nest site. Budding is the major factor underlying the invasiveness of Pharaoh ants. A single seed colony can populate a large office block, almost to the exclusion of all other insect pests, in less than six months. Pharaoh ants have become a serious nuisance pest in hospitals, rest homes, apartment dwellings, hotels, grocery stores, food establishments and other buildings. They feed on a wide variety of foods including jellies, honey, shortening, peanut butter, corn syrup, fruit juices, baked goods, soft drinks, greases, dead insects and even shoe polish. Also, these ants gnaw holes in silk, rayon and rubber goods. In hospitals, foraging ants have been found in surgical wounds, I.V. glucose solutions, sealed packs of sterile dressing, soft drinks, water in flower displays and water pitchers. These ants are capable of mechanically transmitting diseases and contaminating sterile materials.